Jad Hamdan and I have uploaded our paper “The lattice of arithmetic progressions” to the arXiv. In it we study the partially ordered set $L_n$ of all subsets of \([n] = \{1,2,\ldots,n\}\) that are arithmetic progressions, including the empty set and trivial progressions of length $1$ and $2$. This poset is a lattice, but for $n\geq 4$, it is not graded. We derive formulas and recurrences regarding the numbers $p_{nk}$ of arithmetic progressions in $[n]$ of length $k$ as well as the number $b_{nk}$ of chains in $L_n$ of length $k+2$ that contain both $\emptyset$ and $[n]$. Let $\mu_n$ denote the Möbius function of the lattice; we give three short, independent proofs of the fact that for $n\geq 2$, $\mu_n(L_n) = \mu(n-1)$, where $\mu$ is the classical (number-theoretic) Möbius function. We finish off by computing the homology groups of the order complex $\Delta_n$ of $L_n$.

Update. (07 Sep 2021) We have added a second version of the paper. Our good friend Jonah Saks has joined the cause, helping us to strengthen the topological results in the second half of the paper. In particular, we are now able to show that $\Delta_n$ has the homotopy type of a sphere or a point.

Construction of the lattice

An arithmetic progression is a set of the form \(\big\{ a, a+r, a+2r, \ldots, a+(k-1)r\big\}\) where $a\in {\bf Z}$ is the base point, $r\in {\bf Z}$ is the step size, and $k\geq 0$ is the length; when $k=0$ the only possibility is $\emptyset$. Recall that a partially ordered set is a set $X$ with a binary relation $\leq$ on pairs of elements of $X$ that is reflexive, antisymmetric, and transitive (basically this means that it behaves like $\leq$ does on the common-or-garden number systems that we know). The poset $L_n$ is defined to be the set of progressions contained in $[n]$, under the order induced by the subset relation $\subseteq$. Here are the Hasse diagrams of these posets for small $n$ ($x>y$ if and only if $x$ is drawn with a larger vertical coordinate than $y$ and there is a path from $x$ to $y$ moving strictly down the diagram).

When $X$ is a lattice with minimum element $\widehat 0$ and maximum element $\widehat 1$, we have $X = [\widehat 0, \widehat 1]$ and it makes sense to write $\mu_X(X)$; we also abbreviate $\mu_X([x,y])$ by $\mu_X(x,y)$. The classical Möbius function arises when we take $X_n$ to be the set of all positive divisors of a given integer $n$, ordered by divisibility. Here we have $\mu(n) = \mu_{X_n}(X_n)$. Equivalently, we can simply take $X$ to be the set of all positive integers, ordered by divisibility. This poset is locally finite, and we have $\mu_X(x,y) = \mu(y/x)$ for any interval $[x,y]$ in the poset. Our paper centres around the fact that the Möbius function of our arithmetic progression lattice $L_n$ above is the same as the number-theoretic Möbius function.

It turns out that this fact can be proved in many different ways, each revealing something a bit different about the lattice.

The number of arithmetic progressions

In a previous paper I worked on with Rosie Zhao, we used the fact that the number $p_{nk}$ of arithmetic progressions of size $k$ in $[n]$ is given by

(Actually, there was an extra factor of $2$ because back then it mattered whether the progression was in ascending or descending order.) For the asymptotic result of that paper, we only really needed the fact that $p_{nk}$ grew like $n^2/k$ (modulo a factor of two depending on if we consider progressions as sequences or as sets). To derive the Möbius function of $L_n$ though, we need to be a bit more exact. Here is a table of $p_{nk}$ for small values of $n$ and $k$. 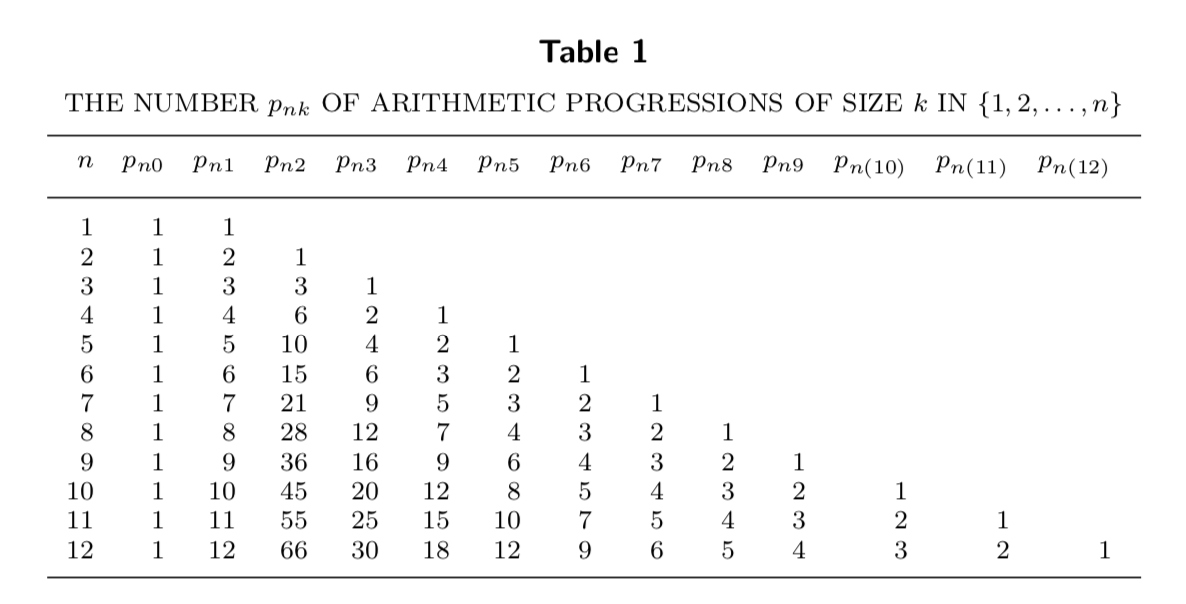 Chains and the order complex

Given a poset $X$, one can define a simplicial complex $\Delta$ called the order complex of $X$, whose vertices are the elements of $X$ and whose faces are chains in the poset. Then the reduced Euler characteristic $\widetilde \chi (\Delta)$ of $\Delta$ is the Möbius function of $X$ with maximum and minimum elements artificially adjoined. Because we already have a maximum and minimum in $L_n$, to use this fact we will remove them to form a new poset $L_n’$. Letting $\Delta_n$ be the order complex of $L_n’$, we have $\widetilde \chi(\Delta_n) = \mu_n(L_n)$. Let $b_{nk}$ be the number of chains in $L_n$ of length $k$. Here is a table for small $n$ and $k$.

We show that these quantities satisfy the recurrence

This can be worked out to give the recurrence $(\ast)$, giving an independent (but similar) proof of Theorem 1.

After a rumble and a tumble, we give a general formula for $\mu_n$.

This allows us to give a proof that $\mu_n(L_n) = \mu(n-1)$ which is of a very different flavour than the previous two.

Homology of the order complex

The description of the coatoms of $L_n$ in fact allows us to compute something strictly stronger than the Möbius function of $L_n$. It allows us to derive the homology groups of the order complex $\Delta_n$.

If $n-1$ is not squarefree, then all the homology groups of $\Delta_n$ are trivial.

Because the reduced Euler characteristic can be expressed as an alternating sum of ranks of reduced homology groups, this is a strictly stronger result than Theorem 1.

In the final section of our paper, we use previous lemmas to prove three further results.

We define an EL-labeling to be an ER-labeling to be an ER-labeling with the further property that for all $[x,y]$ the unique increasing maximal chain $m$ has $\overline\lambda(m)\preceq \overline\lambda(m’)$ for all other maximal chains $m’ \in [x,y]$. The fact that $L_n$ is comodernistic immediately implies that $L_n$ is EL-labelable, by a result of T. Li [Journal of Combinatorial Theory, Series A 177 (2021) 105334].

Complements. As a last miscellaneous theorem, we show that $L_n$ is complemented if and only if $n-1$ is squarefree.