Binary trees are one of the most common data structures in computer science. They can be used to represent hierarchy and also arise in many different computer algorithms related to sorting and searching. Today, we’re going to investigate a cool algorithm for drawing organic-looking trees and then look at different “species” of binary trees.

It is possible for a node to have one internal child and one external child, though the above picture does not have any example of this. Trees are conventionally drawn with the root node at the top, growing down. Of course, real-life trees grow upwards. They also have thicker branches closer to the root and thinner branches towards the leaves.

A concept that will help us draw more realistic-looking trees comes from the field of hydrology, which is concerned with the properties of Earth’s bodies of water. Hydrologists Robert E. Horton and Arthur N. Strahler came up with a hierarchy on streams that neatly describes their relative sizes. The following diagram, courtesy of Wikipedia’s entry about the Horton-Strahler number, illustrates this well: 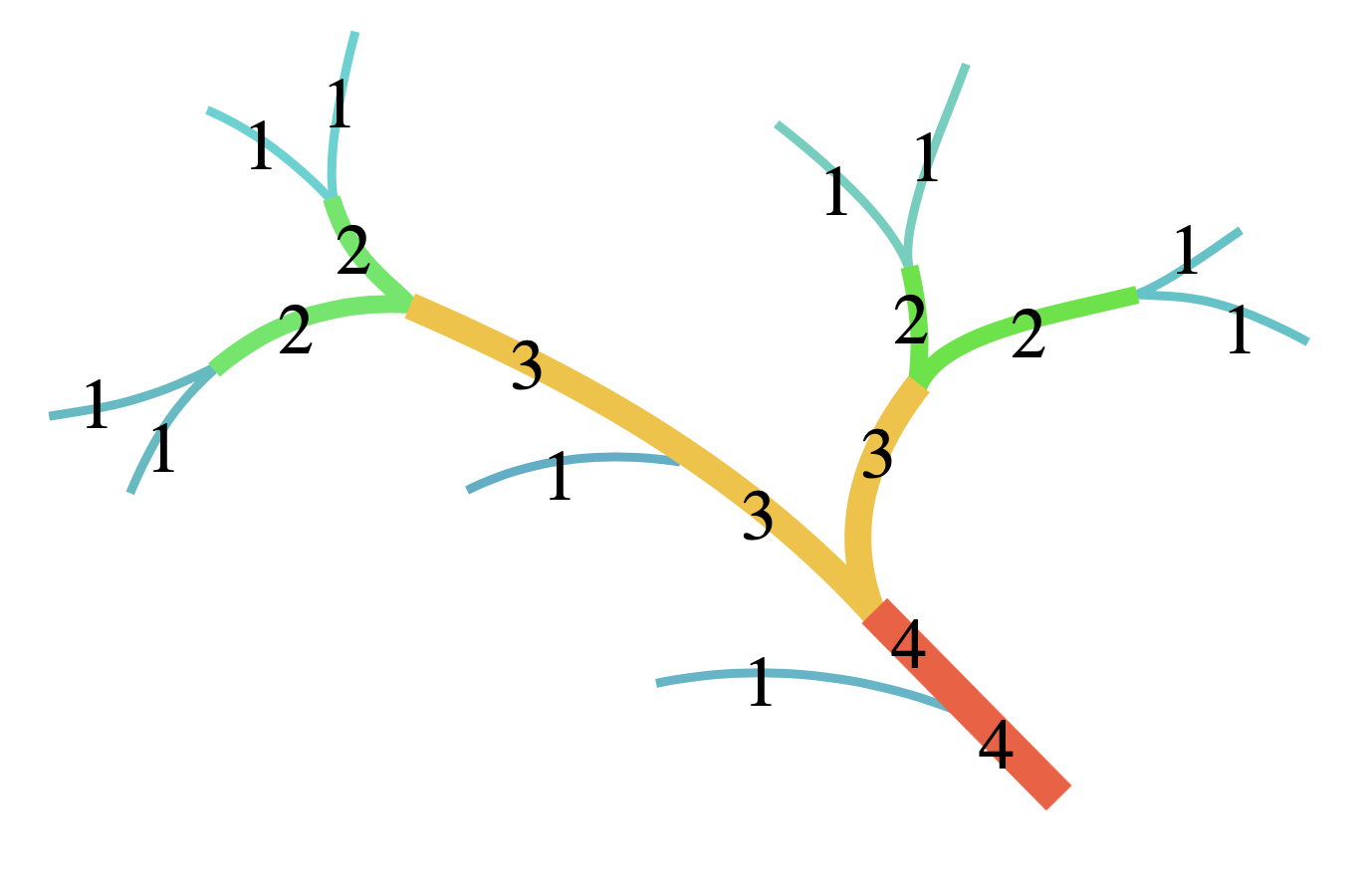 A stream with a higher Horton-Strahler number carries more water. Trees, just like rivers, have a natural branching structure, so it is easy to adapt the Horton-Strahler idea to nodes in a tree.

(This is exactly the same as in the river diagram above, except that we choose to start leaves at $0$ instead of $1$.) We use this information to draw nodes. Leaves, which have Horton-Strahler number $0$, can be drawn as tiny isoceles triangles. For internal branch nodes, the Horton-Strahler number of a node tells us more or less how thick the branch of the tree should be and we can also use it to determine the branching angle. This idea is due to Xavier Viennot and presented as an exercise in one of Knuth’s books (TAOCP Vol. 4, page 485). It results in tree drawings such as this one: 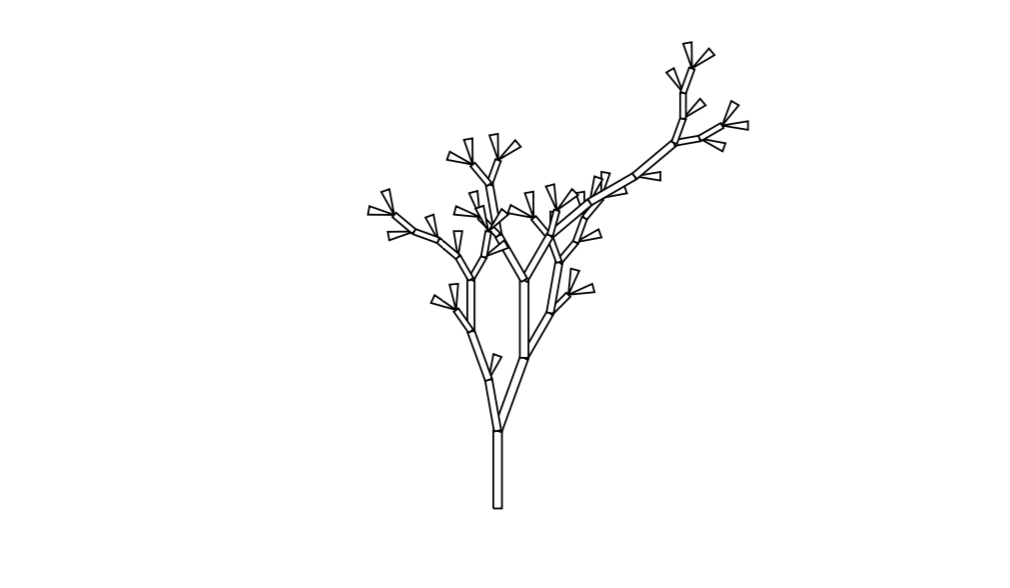 Just like the one at the top of this post, this tree has 36 leaves, though the placement of leaves is clearly much more random. This leads us to the concept of different “species” of random trees.

There is a rather neat algorithm, due to Jean-Luc Rémy, that grows a binary tree in such a way that after $n$ steps, all binary trees with $n$ nodes are equally likely to occur. Here are three randomly-generated binary trees, each with 70 nodes, drawn using Horton-Strahler numbers: 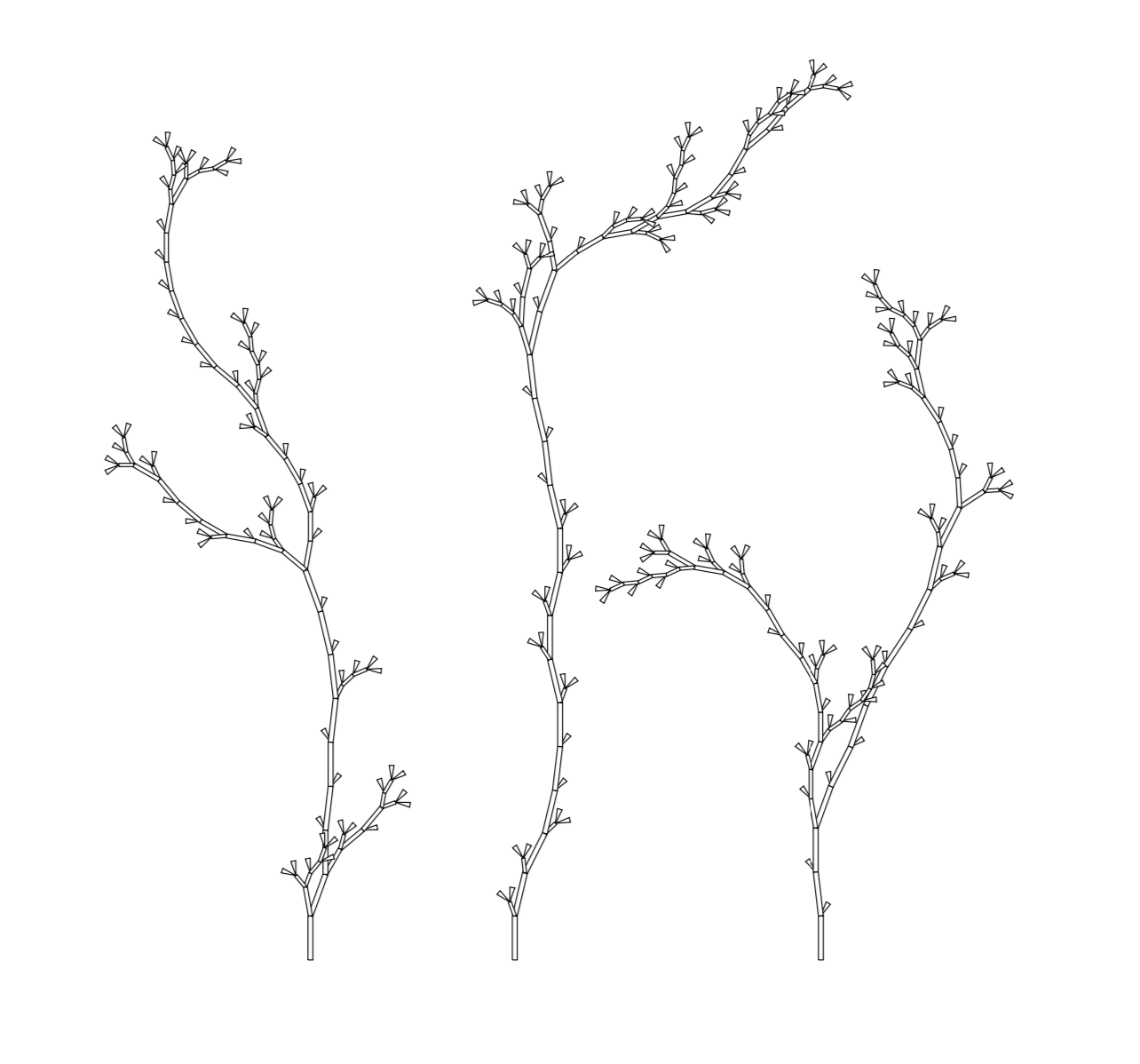 The average height of an $n$-node binary tree was shown by Flajolet and Odłyżko to be roughly $2\sqrt{\pi n}$, so these trees end up being rather tall and spindly. 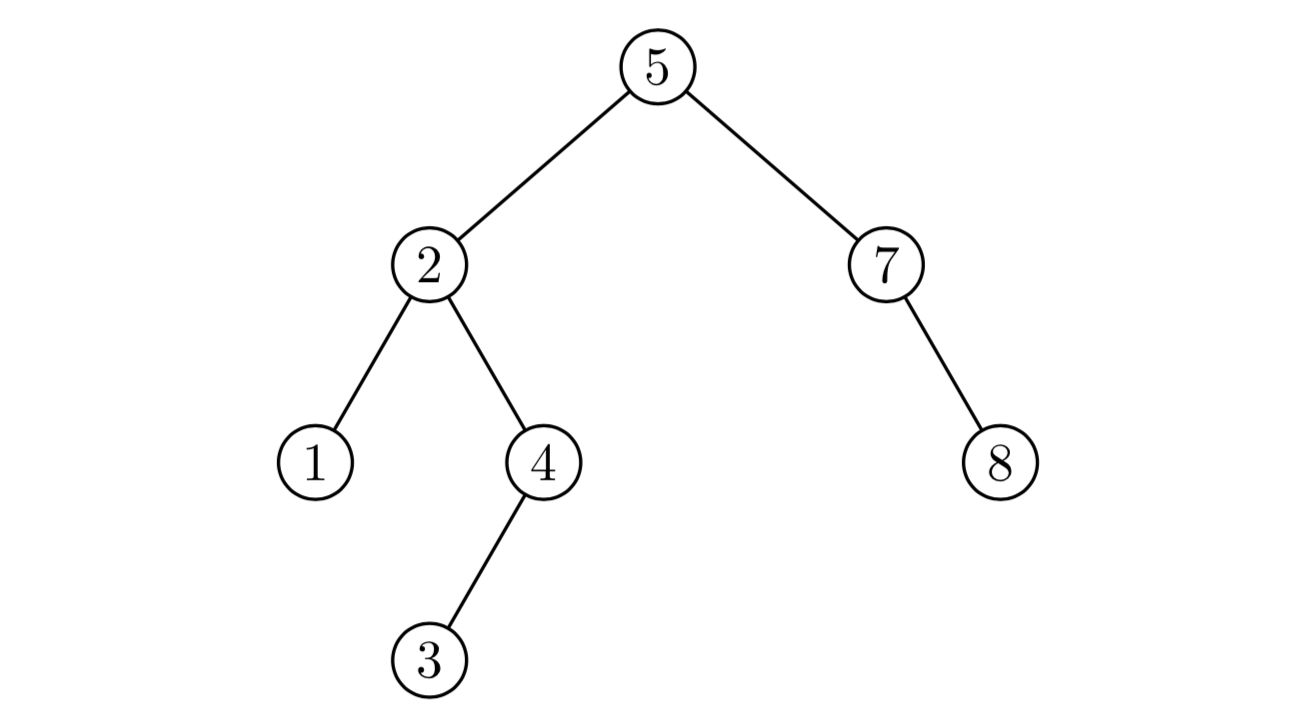 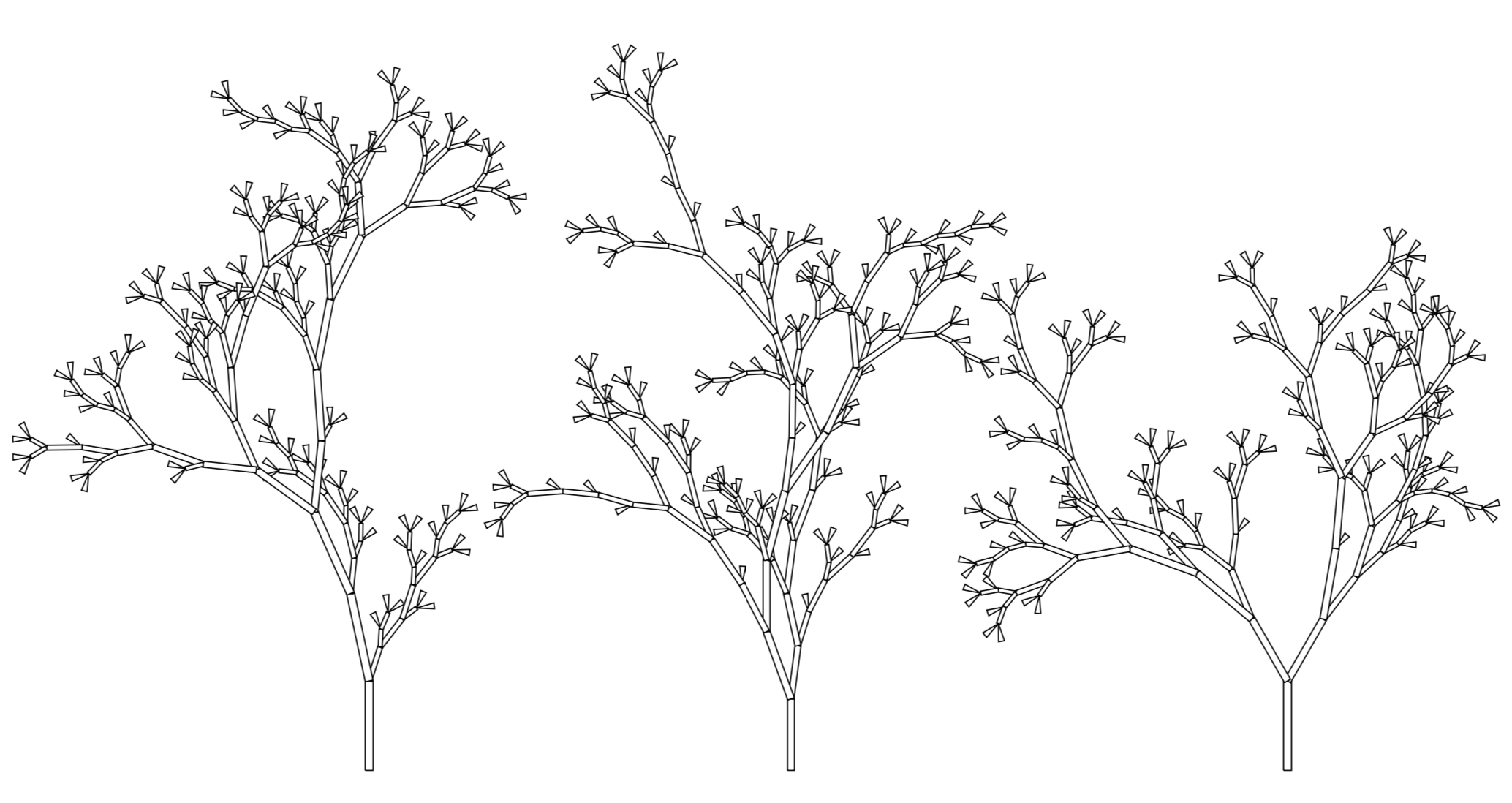 These trees certainly look like they’re from a different “species” than the random binary trees we saw earlier. Even though they have twice as many leaves, they’re quite a lot shorter than the trees generated by Rémy’s algorithm. This is because the average height of a binary search tree with $n$ nodes is proportional to $\log n$ rather than $\sqrt n$. (This is good news for our search algorithms, since $\log n$ is much smaller than $\sqrt n$ when $n$ is large.) 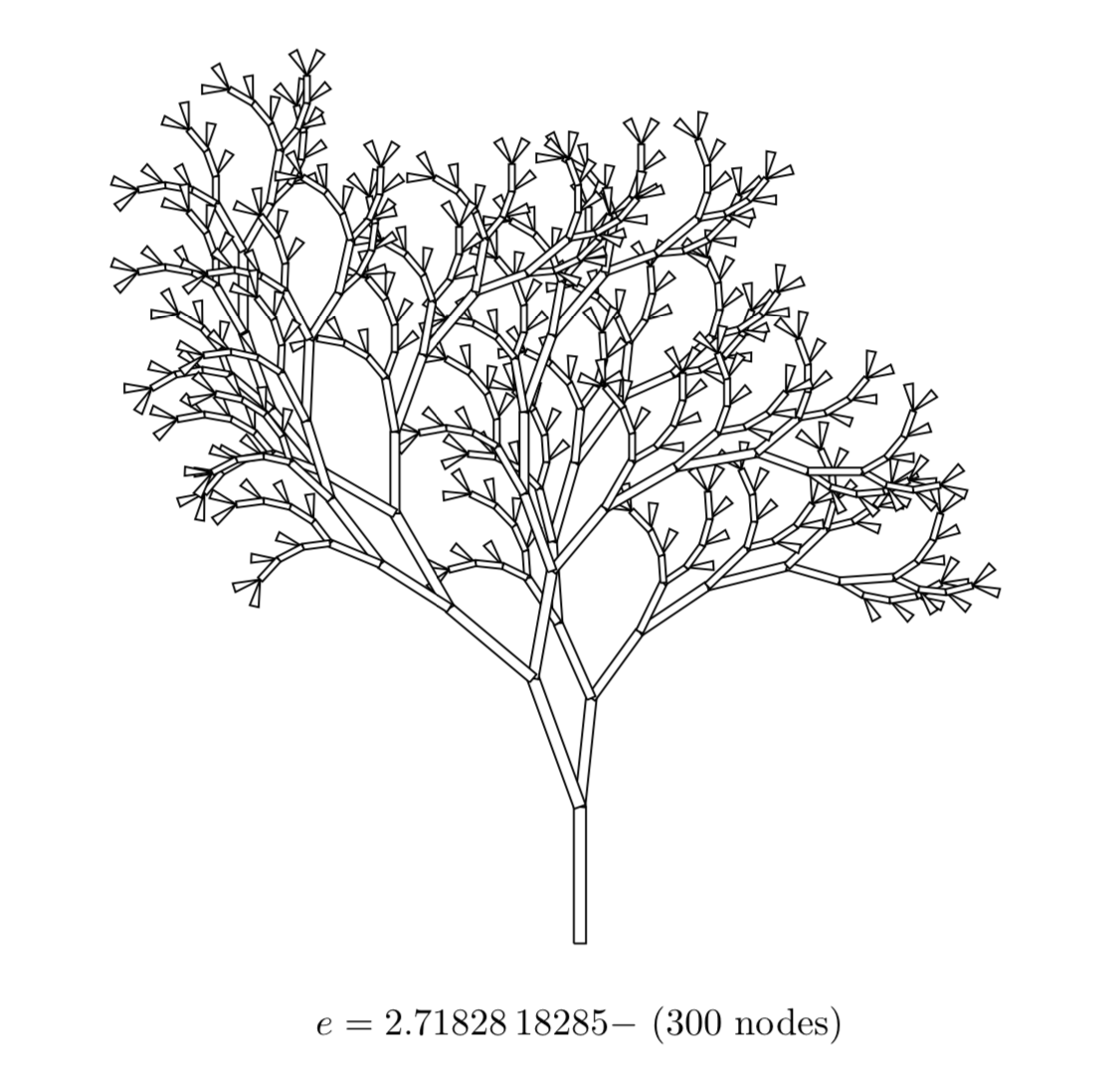 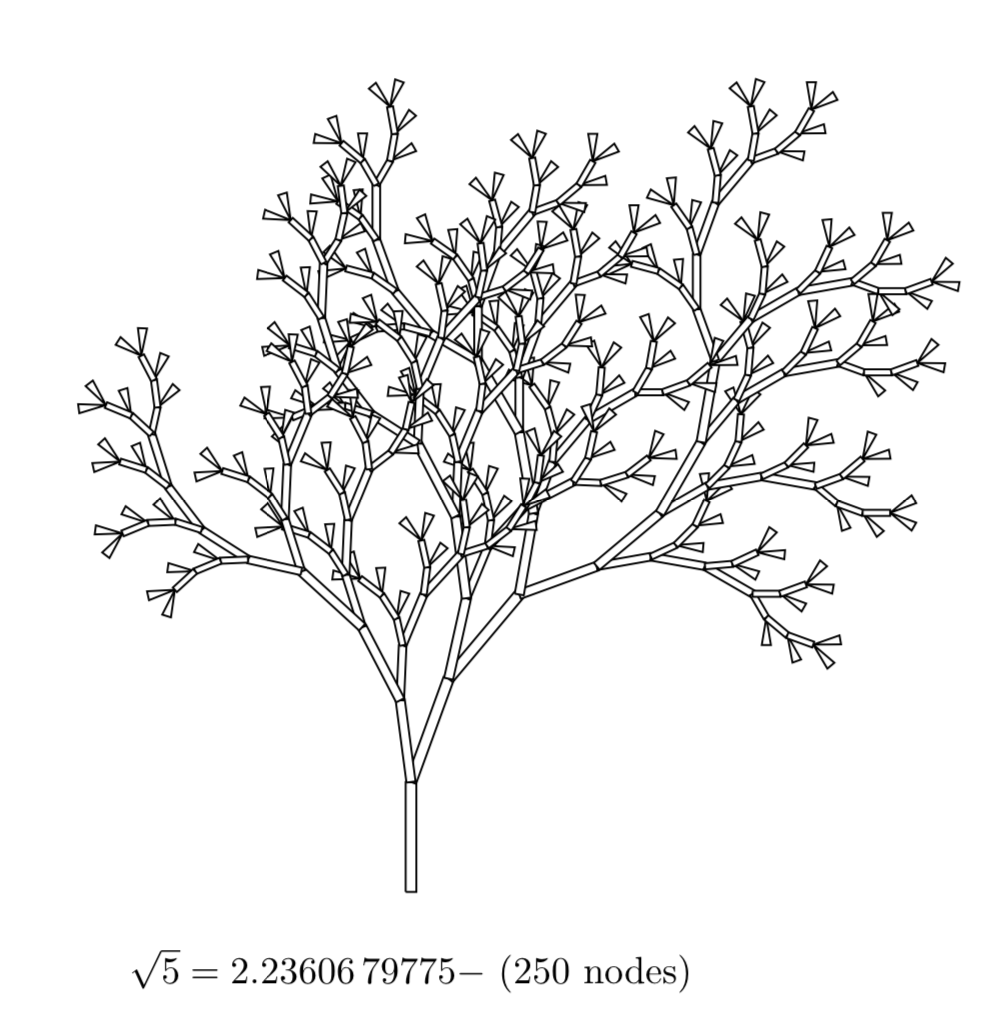 These trees have a little more regularity than completely random binary search trees, but the fact that the numbers are equidistributed means they still look somewhat natural. The Weyl trees of some irrational numbers turn out a bit ugly, because if $\theta$ is “too close” to a rational number, then floating-point error will eventually cause a cycle to occur, which theoretically should not happen when $\theta$ is irrational. I have compiled a PDF of some nice-looking Weyl trees here.

The links I put inline to various papers and Wikipedia articles are a good place to start if you’re interested in drawing your own trees. Also, Luc Devroye has a page in which he describes a few ways of both generating and drawing random trees. His paper with Paul Kruszewski describes a tree-drawing method that uses subtree sizes rather than the Horton-Strahler number.

A postscript on PostScript. Apart from the river diagram that came from Wikipedia, all the figures were hand-coded in PostScript. The code for generating trees can be found in this GitHub repository.