As a starting point, consider the following definitions. A set $S$ of integers is said to be

We consider only finite sets in this post, and as a first observation, we note that taking $S$ to be any subset of the primes, we satisfy all three conditions. Let’s talk about primitive sets first. We will count the number of primitive subsets of \([n] = \{1,2,\ldots,n\}\) that have size exactly $k$, for $0\le k\le n$. Letting $P_{n,k}$ be the number of such sets, here is a table for small $n$: 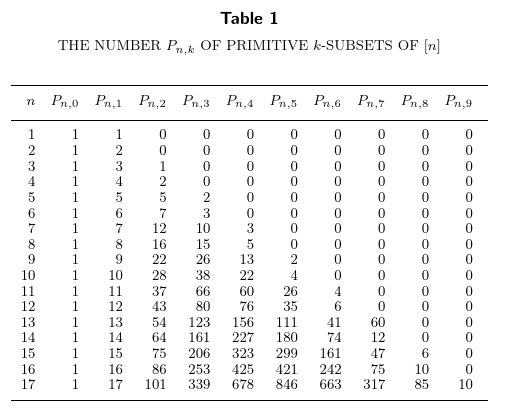 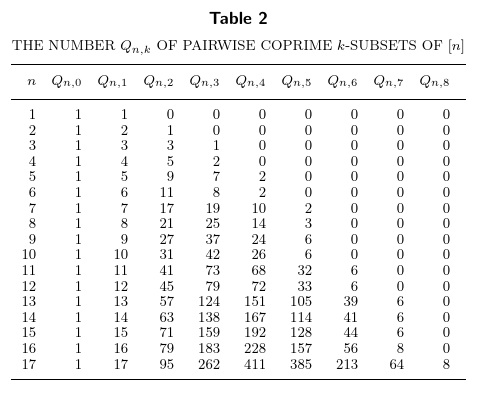 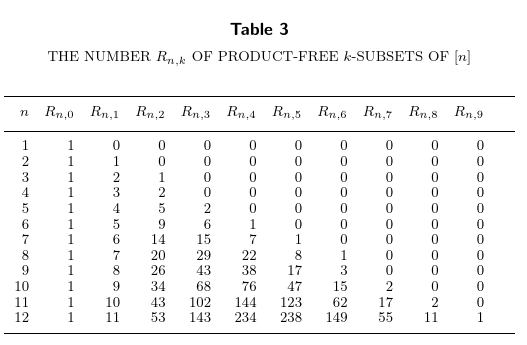 Now for the actual definition. We say that a set family \({\cal F}\) is \(m\)-partition-intersecting if for all $n\ge 2$, the following three conditions are satisfied (condition 2 does not depend on $n$ but conditions 1 and 3 do):

We are now able to state the main theorem.

The proof of this theorem uses some basic results from enumerative combinatorics, relating the Möbius function of a poset to the homology of a certain simplicial complex.

From here, we just need to show that primitive sets, pairwise coprime sets, and product-free sets are all families that fit in our class:

A generalisation of primitive sets

A primitive set is a set that does not contain more than one multiple of any integer. We make this definition more general by forbidding sets with more than $s$ multiples of any given integer, and when $s=1$ we recover the definition of a primitive set. For $s\ge 2$, the family of $s$-multiple sets is not $m$-partition-intersecting for any $m$, but we still have the following theorem.

The proof of this also goes through the homology groups of a certain simplicial complex, but this time the calculations involved are more technical.