Calculators were great fun as a kid. You could add one and one and then race a friend to one hundred pressing only the equals sign. There were long formulas with colourful mnemonic stories that ended in crude words (if you turned the calculator upside-down). For many, pocket calculators are the earliest introduction to the concept of “programming” a machine, in the sense that you can input a series of symbols representing values and operators to get an answer as output. And often, the order in which you have to type the operations into a calculator doesn’t exactly match the order in which they appear on the page. But higher-end calculators (as well as Google and Wolfram Alpha) can take a normal mathematical expression and apply the order of operations to provide the correct result. This article will go through how this process works and how it roughly approximates the way computers read and understand programming languages.

Note: when a word appears in bold, it has an entry in the glossary at the bottom of the page.

As we learned in grade school, evaluating the expression $2 + (-3) * 4^2 / (7 - 5)$, from left to right will not produce the correct answer. Instead, we need to do the operations in brackets first, then the exponents, then division and multiplication in left-to-right order, then addition and subtraction in left-to-right order. (The acronym I learned is BEDMAS, though variations exist.) Applying these rules, we can represent the above expression as the following tree. 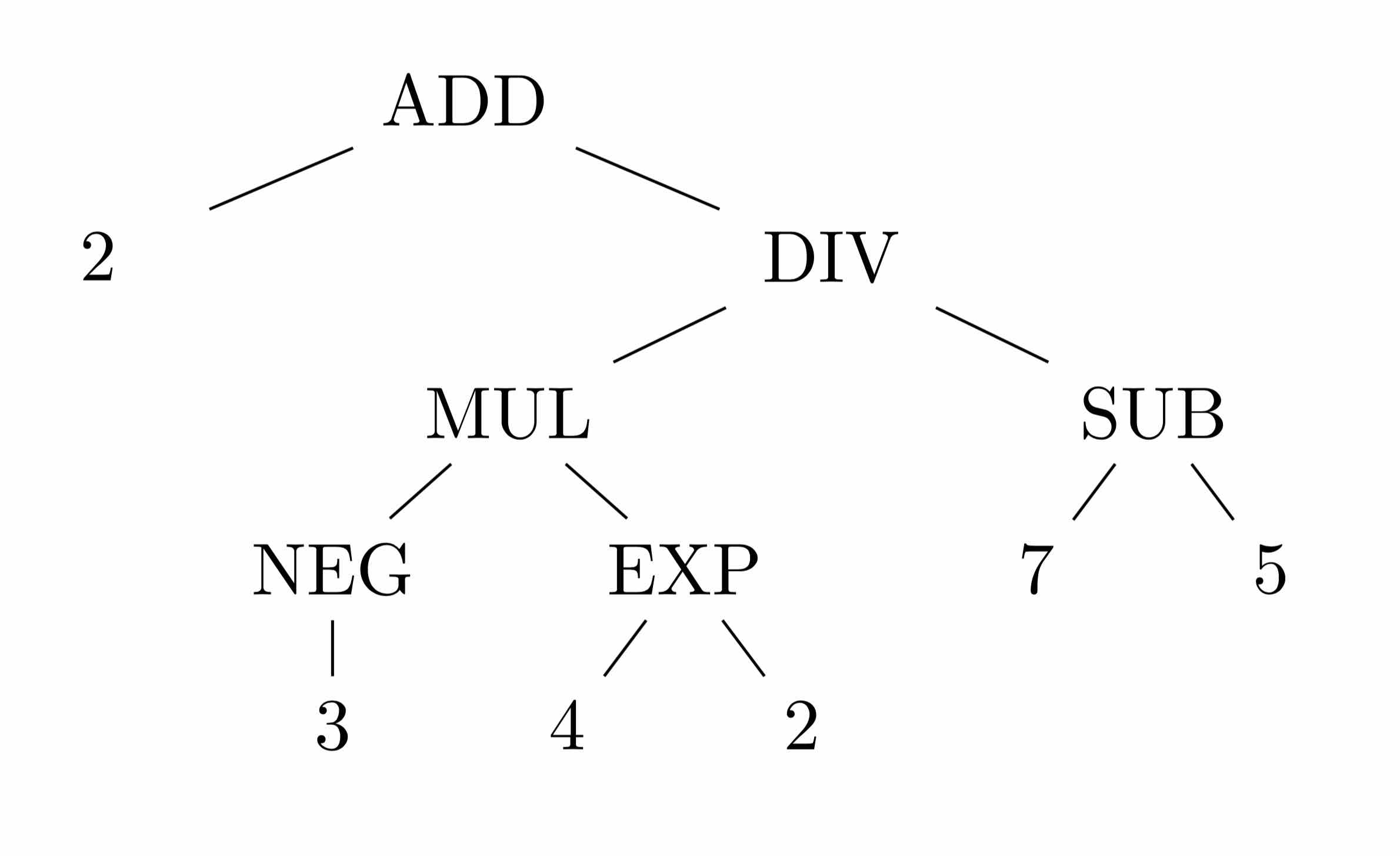 We just made it harder to read! But you can imagine how to the algorithmic mind of a calculator, this is very easy to interpret. It starts at the top and tries to add two numbers. But the second argument, $\text{DIV}$, is not a number, so it has to do that operation first. Eventually it gets to the bottom of the tree where it finds numbers as leaves. For example, the binary operation $\text{EXP}$ sees two numbers, $4$ and $2$. It performs $\text{EXP}(4,2)$ and feeds the result, $16$, up to the next level. Similarly, the unary operation $\text{NEG}$ sees one number, which it negates and passes up to $\text{MUL}$. One-by-one, the operations disappear and are replaced with numbers. Eventually we are left with a single number.

Not only have the brackets disappeared, we now get a very clear idea of the order in which operations are performed. Whereas even in the tree representation, one might naïvely get the idea that addition happens first, here we clearly see that it happens last. Let’s see the steps a computer would take to evaluate this expression:

This is what we would have done on paper, but in a sequence of steps that a computer can easily understand. This conversion from infix to postfix notation can be done using the shunting-yard algorithm, so called because it uses two stacks and the process of pushing and popping from these stacks resembles shunting cars at a railyard. You can read about the algorithm on Wikipedia, or see the version I wrote as part of the calculator I made, which I’ll get into next.

I created OCalc, an OCaml program that takes in a mathematical expression as input, and simulates a stack-based machine to calculate the answer. For example, we can enter our toy example into OCalc:

Next the list of tokens is parsed into an abstract syntax tree like the one we saw earlier. Then the tree can be analysed and compiled into a series of instructions that a machine can interpret. For larger grammars, this can be a very complicated process, but for our simple mathematical grammar, we can simply use the shunting-yard algorithm to eliminate brackets and get the other tokens in the correct order. These tokens are subsequently converted into instructions that our virtual machine can understand. Again, in a more complex grammar, this is a non-trivial procedure, but for us, each token directly translates to a single stack operation. After this step, our sequence of instructions looks like this:

Whenever the machine sees a LOAD instruction with a value, it pushes the value onto its stack, stored in memory. Then whenever it sees an operation, it pops the correct number of arguments off the stack, performs the operation, the pushes the result back onto the stack. After the final instruction, provided the expression given was well-formed, there will be only one number left on the stack, which is the value the machine will return.

The jump to programming languages

Our calculator might have seemed like a very long-winded way of telling a computer to do math — and it is! — but this process is exactly the way many programming languages are implemented. For example, take the following Python procedure that performs an important calculation:

If you load the function into the Python interpreter and disassemble the function okay (i.e. get the machine instructions associated with the Python object), this is what you get:

The calculator I created is a really slow and complicated way of getting a computer to do math, but I hope that it illustrates a little bit how human-readable instructions might be read, understood, and executed by a machine. In the near future, I plan to write my own version of the Python interpreter and hopefully the procedures used in implementing OCalc can be scaled and generalised to accomplish this.