After focusing on groups for the first half of the semester, we’ve finally started to tackle rings and fields in my algebra class. Because there are so many different types of rings, I’ve been trying to wrap my head around them by looking up concrete examples of rings with different properties. In the book Rings and Ideals by Neal H. McCoy, I found the interesting example of the ring of subsets of an arbitrary set. Unlike most rings, whose elements are numbers of some sort, this ring has sets as its elements! Let’s dive into some cool properties of this wacky ring.

Some preliminaries about sets

In this post we will be dealing with sets. If you’ve seen sets before, feel free to skip this little section. If you haven’t dealt with them much before, don’t worry! It’s actually a pretty natural concept (that can get super complicated if you dig really deep into it). A set is just a collection of objects. Here are a couple of definitions we’ll need regarding sets: 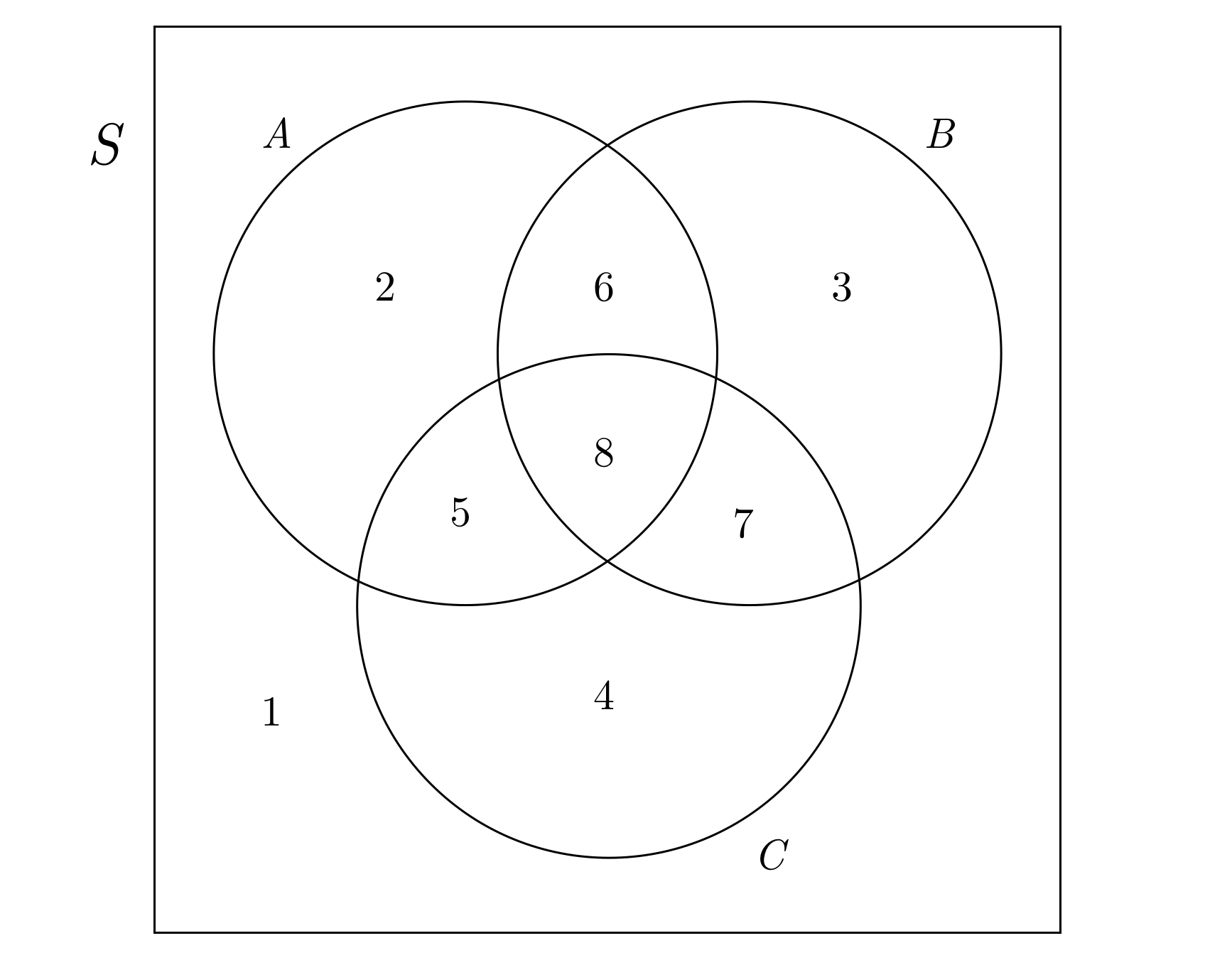 There are a bunch of rules concerning how these basic operations can be combined, which you can consult at this Wikipedia page. We’ll be using some of these rules later.

What is a ring?

Next, it’s worth mentioning what a rings actually are. Again, if you’re already comfortable with rings, you can skip this little section. Informally, a ring is a set of objects, most often numbers of some kind, which follow the rules of addition and multiplication we know and love. The set of integers \(\mathbb{Z}=\{\ldots,-2,-1,0,1,2,\ldots\}\) form probably the most familiar ring. Formally, a ring $(R,+,\cdot)$ is a set $R$ on which are defined two operations $+$ and $\cdot$ such that the following rules apply.

Don’t let the gross symbols scare you! You learned all of these rules back in elementary and junior high. Notice that we didn’t require that multiplication be commutative. If $R$ is a ring with the following additional property,

then $R$ is a commutative ring. Furthermore, if $R$ is a ring, not necessarily commutative, with the following property,

The power set forms a ring

Don’t get too disappointed though. With a small modification to our definition of addition, we can construct a ring! If we have two sets $A$ and $B$, define their sum as the set of all things in $A$ or in $B$, but not both. Formally, addition now looks like this:

while the product is still the intersection as before:

Now $(P(S),+,\cdot)$ is a ring! Our operations are now a little more complex, so to fully wrap your head around them, I encourage you to figure out what regions are represented by the following expressions with our new definitions.

Here, I’ll put up a pretty new picture so you don’t have to keep scrolling up. 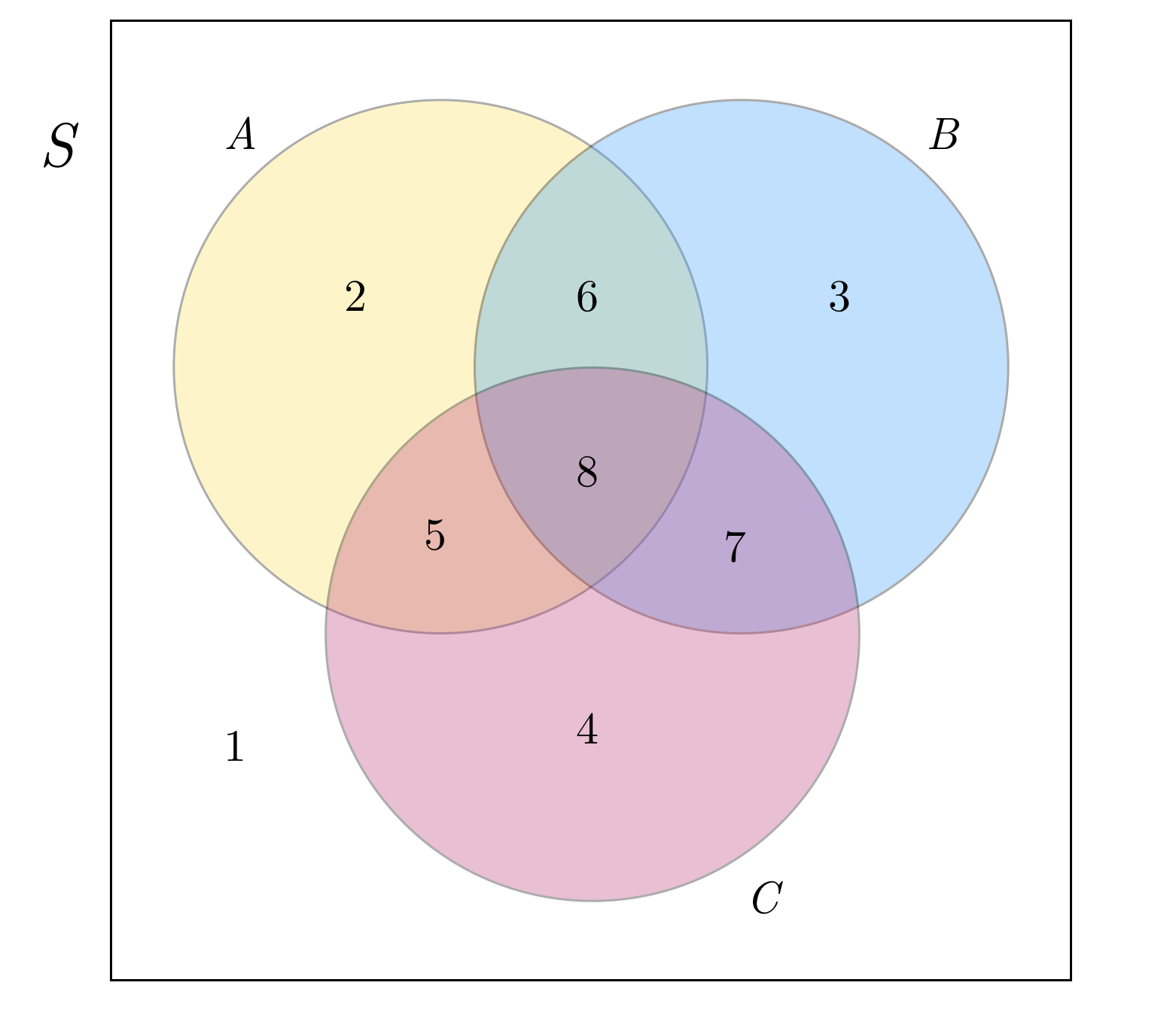 If your answers were

then congratulations! You understand how addition and multiplication work in our new ring! In a moment I’m going to include a proof that this is indeed a ring. In fact, it’s a commutative ring with unity. It’s a long and tedious proof that involves a bunch of rules from the Wikipedia page I linked above. You can read it if you want, but I don’t think it’s especially enlightening. What I do suggest is that you take a moment to prove this to yourself from the picture. If you can answer (in your head or on paper) the following questions, then I think you’ll have a pretty good grasp on the concept of rings as well as operations on sets.

I hope this will be a fun exercise. You can find the answers in the following proof.

We will prove that $(P(S),+,\cdot)$ is a ring by verifying that it satisfies all the ring properties one-by-one using equality rules from the algebra of sets.

Starting with $A+\emptyset$ we can also arrive at $A$, but we’ll see later that addition is commutative, so this is good for now. In any case, $\emptyset$ is the additive identity (i.e. the zero) of $P(S)$.

First we will prove the following identity:

Yay. We have found that addition is associative over our set.

Let $A,B\in P(S)$. We use that union and intersection are both commutative:

So addition is commutative.

Intersection is associative over sets so we get this one for free:

Distributivity of multiplication over addition

So multiplication distributes over addition and we are happy. The proof for $(A+B)\cdot C=(A\cdot C)+(B\cdot C)$ so I will leave it out. Try it for yourself if you want. In any case, we have proven that $(P(S),+,\cdot)$ is a ring.

There’s nothing too exciting here, because intersection is already defined to be commutative in the algebra of sets that we’re using. So $A\cdot B=A\cap B=B\cap A=B\cdot A$ and we’re done.